AutoCorres is a program verification tool developed at the Trustworthy Systems Group. 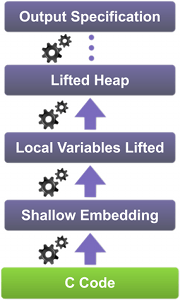 AutoCorres (up to 1.0) was developed by David Greenaway. Most of its theories and algorithms are described in his PhD thesis.

AutoCorres requires Isabelle 2020. The downloads below include a bundled copy of the C-to-Isabelle parser, which is also required for AutoCorres. The tool is released under a BSD-style license, however some bundled components are under other licenses. Please refer to copyright notices included in the release for further details.

The supplied README gives an overview of the available AutoCorres configuration options and example proofs.