Peter's research interests include operating system abstractions for, intra alia, storage, scheduling, memory management, and locking. He is also interested in capacity planning, and in systems performance measurement and optimisation. His main expertise is in Unix and Linux kernels, and low level system support built on these. He also maintains the Trustworthy Systems website and internal infrastructure. 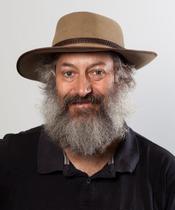 Related hobbies include music, photography and fine wines, these also occasionally lead to research, for example the Articulate extension to lilypond

Peter is a member of the Trustworthy Systems team, and contributed inter alia in the areas of software engineering process, Linux kernel expertise, locking and scheduling, and user-level device drivers.

One interesting project was the Robot Clarinet. For this project we modified the Lilypond music typesetting program to produce better midi.

Peter Chubb spent over 13 years working in commercial operating systems training and research with Softway Pty Ltd. He was systems architect for a number of projects including Hibernator, a checkpoint-restart tool for UNIX(TM); and for two years was Vice President of research while overseeing aspects of Aurema's ARMTech(TM) resource management product.

In 2002, Peter moved to the University of New South Wales (UNSW) to work on the Gelato program.

After the Gelato project finished in 2007, Peter increased his hours at NICTA, and became a conjoint senior lecturer in the school of Computer Science at UNSW. He moved to CSIRO's Data61 when NICTA merged into CSIRO in 2016.

Since gaining his PhD at the University of New South Wales in 1989, after having also gained bachelors degrees BSc in Physics (1981) and BE (Hons I) in Electrical Engineering (1983) at the same institution, Peter has had more than 40 years experience in Operating Systems research. Projects which included significant amounts of Peter's input and direction include the Hibernator checkpoint/restart project for Irix 6.2 and Fujitsu's UXP/M, the ShareII resource manager for Irix 6.2 and 6.5; Solaris Resource manager; and Aurema's ARMTech for Linux and Windows.

Peter was a member of AUUG, the Australian Open-Source user's group, and helped to found SLUG, the Sydney Linux users group. He is still a member of Linux Australia.